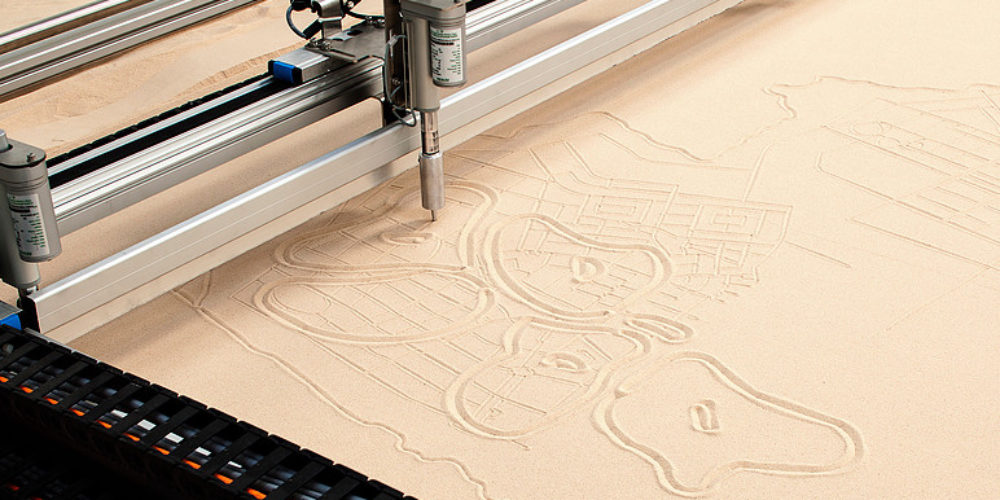 The Urburb presents a reflection upon 100 years of modernist development in Israel. The Urburb is a neologism which refers to the contemporary mesh of urban and suburban sprawl – a fragmented mosaic composed of the early twentieth century garden-city, agrarian settlements, mid-century social housing, and the generic residential typologies of the past two decades.

In order to explore these dynamics, curators Ori Scialom, Dr. Roy Brand, Keren Yaela Golan and Associate Curator Edith Kofsky transform the Israeli pavilion into a modernist construction site, filled with four large sand-printers, which automatically sketch the story of one hundred years of modernist planning in Israel, shifting in scale from national plans to those of single buildings. The printers are accompanied by a large-scale video and sound piece that plays the Urburb patterns as a music box.

The printers present a multiplicity of scenarios dealing with themes like over-planning, pattern language, and the dynamics of printing and erasing. experience of living within a modernist machine, under the signs of automation and the promise of utopian redemption.As quickly as the various schemes are etched into the sand, so are they wiped away, emphasizing how these generic pattern-oriented plans are ‘printed’ from above according to changing ideologies and evolving master plans.

In keeping with the curator’s experiential approach, the theoretical research is not presented on the walls of the space, but rather through a multi-disciplinary book titled The Urburb, published by Sternthal Books, presents visual and theoretical research alongside philosophical and cultural texts by many of Israel’s most prolific writers, including Amos Oz, Julia Fermentto, Eyal Sagui Bizawe, Zvi Efrat, Tamar Berger, Eshkol Nevo, and Shimon Adaf.

The Urburb is more than an architectural phenomenon; it is a state of mind and a form of life. Swinging between two parallel vectors—repetitive actions and fixed notions—the Urburb is the result of a particular modernist trajectory leading from an early emphasis on simplicity, compactness and equality to the inflated and homogenous neo-liberal formations of today.

The project has been exhibited since at The German Center for Architecture DAZ gallery, Berlin (December 2014-January 2015), ARTPORT, Tel Aviv (March-May 2015), KW, Berlin (June-August 2015) and Museum Angewandte Kunst, Frankfurt am Main (September 2016) The project was donated to the Israel Museum by the artists and Outset Contemporary Art Fund