Born in Utrecht, The Netherlands, Bouke de Vries studied at the Design Academy, Eindhoven, and Central St Martin’s, London. After working with John Galliano, Stephen Jones and Zandra Rhodes, he switched careers and studied ceramics conservation at West Dean College. Every day in his practice as a private conservator he was faced with issues and contradictions around perfection and worth: using his skills as a restorer, his ‘exploded’ artworks reclaim broken pots after their accidental trauma. He has called it ‘the beauty of destruction’. Instead of reconstructing them, he deconstructs them. Instead of hiding the evidence of this most dramatic episode in the life of a ceramic object, he emphasizes their new status, instilling new virtues, new values, and moving their stories forward.

War & Pieces began as an Arts Council-funded project at the Holbourne Museum, Bath in the UK in 2011. This monumental installation represents a war of attrition between porcelain and sugar in the form of an aristocratic table centrepiece. The atom-bomb mushroom cloud (a vortex of exploded white porcelain, including motifs familiar to the artist’s work: Jesuses, Guan Yins, Frozen Charlottes and funerary flowers) is flanked by six battle-scenes in which toy cutlery fights cyborg ‘transformer’ weaponry.?

War & Pieces travelled from the Holbourne Museum to the Oval Room at Schloss Charlottenburg, Berlin and the State Dining Room at Alnwick Castle in Northumberland before it arrived in Amsterdam in October 2013. 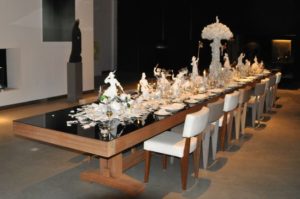 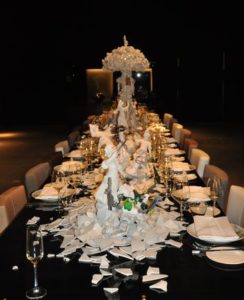